We bring a personal one on one approach to every patient. 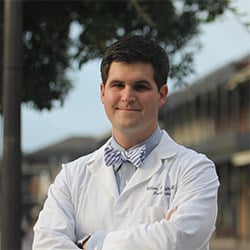 Dr Luster is a Natchitoches native, with deep roots here. His grandmother’s family settled Page Farms near Allen in the 1850s. He attended NSU Lab school and graduated from LSMSA in 2001. He earned a BS in Biology from Washington and Lee University Magna Cum Laude in 2005. While there he interned in the US House of Representative in Washington, DC, and worked in research labs at Tulane and LSUHSC-Shreveport. He studied at the Bute Medical School of the University of St Andrews, and New York University’s Stern School of Business before earning his MD at the Louisiana State University School of Medicine in 2009. He successfully completed Family Medicine Residency at East Jefferson General Hospital in affiliation with Tulane University in 2012. He placed in the 94th percentile of medical school applicants on the national admissions test. He passed all of his licensing examination and boards on the first attempt. He is licensed to practice medicine in Louisiana and board certified in Family Medicine. He is also licensed to perform DOT Commercial Driver’s Examination and is the only FAA Aviation Medical Examiner in Natchitoches. He has a particular interest in preventative care and wound care.

In his spare time, Dr Luster enjoys working on the family farm, duck hunting, water skiing, golf, cooking, travel, and flying (he is a licensed pilot).

“I have always been able to talk to the doctor and get my problems resolved. Coming here is like dealing with trusted family. Would not consider changing doctors.” Sara James

Connect With Us On Social Media